Mobilizing Doers in a Citywide Summit 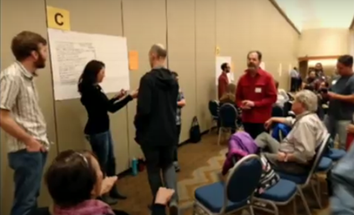 Who are the right people to do the work of revitalizing a community? Invite broadly and whoever comes are the right people. In Albuquerque over three hundred of those “right people” came to a series of three resident-driven meetings to generate action topics such as  Public Health & Poverty  •  Local Economy  •  Housing & Zoning •  Public Safety & Crime •  Active Transportation & Safety  •  Vision for the Central Corridor  • Environment & Urban Resources  •  Community Engagement & Communications.

Hosted by Urban ABQ, a 500+ member coalition advocating and educating “for a better live/work/play, healthy and equitable city for everyone”, and co-convened by 90 individuals and organizations that agreed the question “What are the issues & opportunities for Shaping the Future of Urban Albuquerque?” was important, that they’d attend and invite others they thought might be interested.

What counts were the conversations of real people on topics they cared most about. The first meeting’s circle of participants grew into one two meetings later that filled the city’s convention center (see video).

The second meeting invited and involved the half dozen mayoral election candidates running for election not to talk, as much to listen, to the ideas and hopes that had been generated to date. The final session identified and began action planning 37 issues of most importance. These were summarized on post cards (with a link to the full proceedings) and sent to the incoming mayor elect as an invitation itself to have the new administration leadership and staff join these active residents as willing co-creators of the city they all wanted to help create.

An example of an invitation (bi-lingual English/Spanish) http://bit.ly/ABQsummit

Notes from all sessions: https://urbanabq1.files.wordpress.com/2017/11/citywide_summit-all_notes_and_attendees.pdf

It started with an invitation. It ended with dozens of postcards to a new mayor.  Read more about how this resident-led effort started and grew in ABQ: https://urbanabq.com/2017/10/10/citywidesummit/

← Newark CDC Seeks to Build Black Wealth in Neighborhoods What Must We Know to Know Where to Start? →